The Prachov Rocks are a place which has been visited since time immemorial. The first officially recorded tourist, though, is Francis I & II (1768 - 1835), who, according to legend, visited the Rocks and had himself carried on a palanquin through a rocky pass, which was later given the name of the Emperor’s Pass. It supposedly took place during the emperor’s visit of Jičín in 1804 when negotiations about a treaty of alliance with the Russian czar Alexander I were being held during the Napoleonic conflict. Modern day historians are however a bit sceptical about such information. The name of the pass remains, nonetheless.

What did certainly take place in 1879 was the visit of Prague businessman Vojta Náprstek, his wife and the Club of American Ladies. The American Ladies did not come from the United States, as it would be rightfully expected, but were a company of energetic, modern and emancipated ladies who adopted the American way of life. The poet Jaroslav Vrchlický also took part in the visit. The company was driven up to the rock town in carts and then continued on foot. Excited articles in the papers of the time came as a result of this visit. 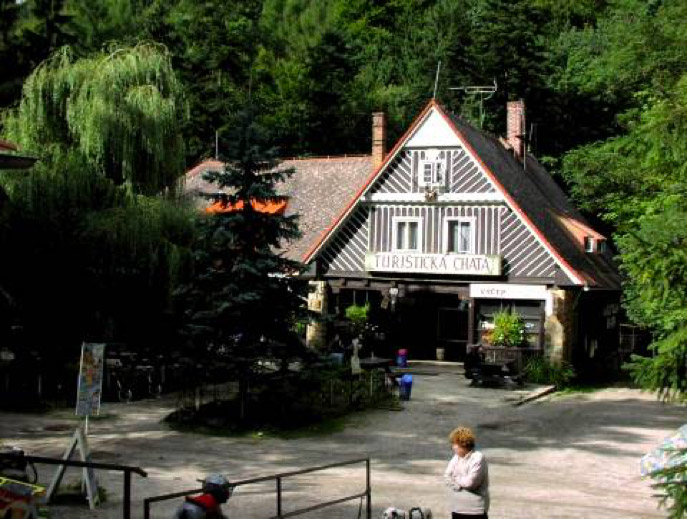 Tourist Cottage in the Prachov Rocks

The Club of Czech Tourists has had a branch office in Jičín since 1892. That is thanks to teachers from Jičín Grammar School, and especially due to František Lepař, who became chairman of the first committee. The club was very active. It bought a hotel in Horní Lochov in 1912 and transformed it into a base for summer visits of tourists in the Prachov Rocks.

The Czech Tourist Club can also be thanked for building the tourist routes. After the Austro-Hungarian empire fell apart and the Czechoslovakian state came into existence, the then secretary Prof. Jakub Všetečka commissioned construction of steps and footpaths between stone blocks on today’s Masaryk’s Route. The work was performed by soldiers of the 22nd Sapper Regiment of Jičín as a part of their training (!). To commemorate this fact, they left the mark of their regiment and the year 1922 in a rock on one of the footpaths. Despite being named after the first Czechoslovakian president, he never walked this path. It was only his secretary, during the ceremonial opening.

At the beginning of the 20th century, the first restaurant was built on the impulse of the owners of the rocks – the Schlick family. It soon became apparent, however, that it was necessary to build a better one. So, in 1923 the Czech Tourist Club built a base – the Tourist Cottage. It was further enlarged in the 30s into its modern look. The road and parking lot were built at the same time. Prachov Rocks got its current look then.

During World War 2, all property of the Schlik family was forcefully transfered to administration of the occupying forces. It was possibly revenge for the Schlik family which joined the declaration of the Czech historical royalty with the support of the Czechoslovakian government before occupation began. A 12 strong delegation of representatives arrived at Prague Castle on 17th September 1938 and presented the stance that supported the unbreakableness of the historical border of the Czech kingdom. That was shortly before the Munich Agreement and the consequent abdication of President Beneš.

The Prachov Rocks and accommodation facilities in there were used by occupation administration and for training of Kuratorium and Hitlerjugend leaders.

The biggest paradox of the time is the fact that while hotels were seized by the occupant forces, the caves became refuge for the enemies of the Reich. For example Stanislav Hylmar escaped penal servitude at the end of February 1945 in Germany and found refuge in his former scout cave in the Prachov Rocks, not even a kilometre from a hotel which housed recuperating wehrmacht soldiers. He stayed there until the liberation in May 1945. He even provided shelter for three Russian Death March escapees in spring 1945. Although it was common knowledge amongst local people, nobody betrayed his position. As is said in local folklore, some children couldnt even go to school for the fear of accidentally slipping the secret.

After the communist coup in 1948, all Schlik property was confiscated. The Prachov Rocks were managed by the Jičín Municipal National Committee. In the 50s and 60s, the Rocks were popular for bus trips – there were usually tens of buses a day. Forest maintenance avoided the touristically frequented area, so that most of the rocks disappeared in tall tree growth with no underbrush. 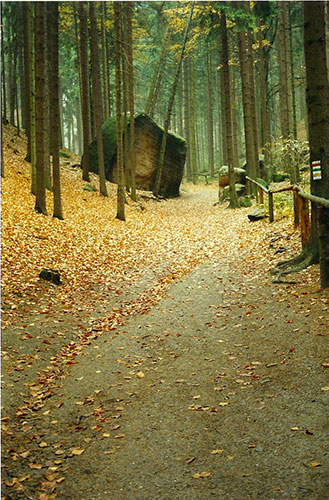 Entrance to the Emperor’s pass in 1996

Restitution in 1996 saw historical property transfered back to the hands of the former owners – the Schlik family. In 2000, the Schliks also took chargé of tourist area of the Prachov Rocks. In cooperation with administrators of the Preserved Area of Bohemian Paradise, they managed to change the composition of tree growth. deciduous trees, fir trees and pine trees and supported nowadays. Spruce tree groves, which are reaching the age of 100 years, are gradually being replaced by more varied growth.

Entrance to the Emperor’s pass in 2016

Modern day tourists usually arrive in the Prachov Rocks in their own cars or buses. They are awaited by parking lots, information boards, restaurants and souvenir shops. In the rock town, there are well maintained tourist routes and paths. It is best to plan a trip for the whole day. Then, you can have enough time to see all the interesting things that can be found in the Prachov Rocks.